Messages are displayed in Japanese, despite selecting other languages.

The old version has that bug.
Please update to version 4.3.3 or later.

No G-Bowl settings or only a few settings are displayed in [Settings].

This problem is a bug of iOS.
It can be fixed by force-quitting the Settings screen and reopening it.

AskDifferent: “App settings are missing in the Settings app”

Some sounds are not large enough even if I turn up the iPhone volume to the max.

If I load other user’s data into my G-Bowl App, the app is force-quit.

Download the latest version of G-Bowl App from App Store and update the current one.

I don’t have an iPhone. Can I use G-Bowl App on an iPad or iPod touch?

You can use G-Bowl App on an iPad 2 or later model or on a 5th-generation iPod touch or later model. Wi-Fi-only models, however, do not have GPS, and you cannot use the G-Bowl functions using GPS on them.

The ball track is not displayed.

Touch the image of G-Bowl at the screen center. Touching the image each time turns on or off the ball track. The default setting can be changed in [Settings].

How can I send recorded logs by e-mail?

In the log replay screen, how can I quickly move to the point I want to see.

You can fast-forward (rewind) the log by swiping the graph to the left or right. Moving your finger a little moves the log a little, and moving it largely moves the log largely. When your finger reaches the edge of the screen, use another finger to continue to swipe. This allows you to skip even 30 minutes or one hour.
You can also move to the next scoring point by tapping the left or right end of the graph.

How can I quickly switch between the combined display and the separate display of the X-Y G graphs?

You can switch between the two display modes by long-pressing (1 sec) the lower graph with two fingers.

My graphs are always jagged even if drive my car carefully.

What do you mean by “a stable place”?

It is best to fix you iPhone in a rigid place, that is, a place near the car body (for example, the floor or the trunk bottom). The center console is good in some cars. It is also good to set your iPhone on the floor of the passenger’s seat (if available, place a floor mat over your iPhone). Try several places by yourself.

What is the vibration of the upholstery?

Many people tend to mix up car vibrations from the road with the vibration of the upholstery. To show their difference, we show graphs (top) when an iPhone was set on the dashboard of a car and those (bottom) when it was set, covered by a floor mat, on the floor of the same car.。

The car was driven through the same corner with the same speed in both cases. Compared with the lower graphs, the upper graphs are mostly jagged. This is the influence of the vibration of the upholstery (allowing a room for improvement).

Are there any videos showing driving practice using G-Bowl (device)?

There are videos of using G-Bowl (device) in the Links page.
They are videos of driving on a mountain road, a Tokyo Expressway and a circuit and of practicing braking and cornering (steering).

How do I practice driving using G-Bowl App?

First, try to drive your car on general roads without yielding high G-forces.
When the detected G-force exceeds the set G Limit (the default is 0.4 G), an alarm bell sound rings. Drive your car trying not to ring this alarm sound. (When you have become good enough, try a new G limit of 0.3 G, for example.)

In addition, when you stop at a red light, always be conscious of stopping your car while maintaining a constant braking (deceleration) G-force (avoiding to change the brake pedal position) so that you can stop your car at an intended position. Once you become good at doing this, you can correctly estimate your braking distance. It improves the safety of your driving and also the sense of comfort and security for your passenger (just like a train stopping at a station). It also allows you to have the right approach speed into a corner in sport driving.

Braking with constant deceleration G-force is so important that you can say that everything depends on it. Practice your driving also using the G Graph and the G Meter so that you can stop your car at an intended position with constant G-force whether it is small or large.

Does a low score mean that my driving is bad?

The objective of the scoring system is to perform “cornering with constant G-force,” and it evaluates the driver’s ability to control G-force on the car. The driver is evaluated on the basis of “matching Braking G and Cornering G with the Target G (plus acceleration being not delayed).” (The ability to control the driving line and the yaw rate is not evaluated.)
This function measures only the driver’s “ability to control the G-force strength” and does not evaluate the driver’s absolute cornering technique. It will be useful if you correctly understand the meaning of the scores and use it for improving your sense of G-force and speed control.

I can hardly turn the G ball neatly.

I want to see a screen of turning the ball neatly.

The picture below is an image a log screen of a driving for which the Target G was set for 0.3 G. 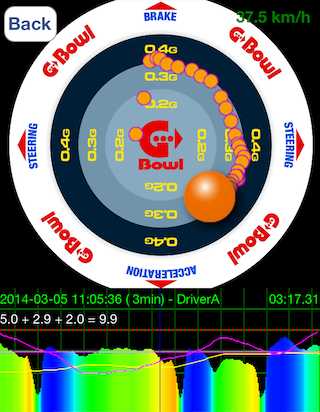